← more from
cowboysversussailor
Get fresh music recommendations delivered to your inbox every Friday.
We've updated our Terms of Use. You can review the changes here. 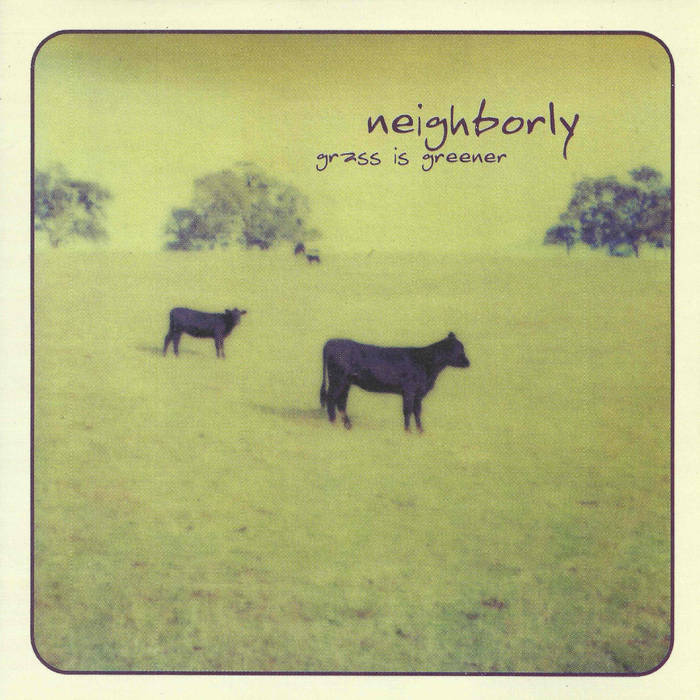 noidea87 This album is satisfying as hell to hear front to back - including all the bonus stuff - and the write-up in the description really shed a light on the situation! I've had these riffs & melodies haunting my head for the past week and they ain't lettin go... Favorite track: Golden, Disposable....

NEIGHBORLY, sadly, was the apex and end of my time as a primary singer/songwriter. From 1993-1996 I was the drive behind Skiploader, a band fortunate enough to sign with Geffen Records and perform with many of our influences/friends at the time (Foo Fighters, Sunny Day Real Estate, Seaweed, Shudder To Think, Heatmiser, etc). When Skiploader imploded [for which I can also assume responsibility] I moved back to California, got married and continued writing the batch of songs that would become Grass Is Greener. The first 11 songs would have likely represented the follow up to Skiploader's From Can Through String and as I listen back from a quasi-objective distance I see an interesting evolution. The Neighborly songs are more traditionally arranged, allowing the vocals and lyrics to come to the forefront, rather than hide behind the quirky rhythms and dissonant chord voicings that Skiploader preferred. The lyrics, although still a bit angsty, are far more universal and less personal diary/confessional than Skiploader. Although it could probably be effectively argued that those traits are exactly what made Skiploader more unique sonically, I suppose like most creative types I suffer from the disease of preferring my most recent efforts.

From 1996-1999, Bob Penn (Coco B's, The Jealous Sound and Racquet Club) and I rallied several friends - Wes Davis, Val Wolfe, Adam Orth and Rodger Marinelli - to help us write, perform and record these 16 songs. As the primary songwriter and now archivist of this project I guess I get the last word, so I cannot overstate how integral Bob Penn is to any project he plays. If I was the brains of this poorly conceived operation, Bob is most certainly the soul which preserves it's integrity. Not to denigrate any of the other performances or contributions (especially Adam Orth who played a huge role in tightening the LPs final performances) but Bob was there from bittersweet end to end and listening to his drums on these songs always brings a smile to my face.

Songs 2-10, the main bulk of the original Grass Is Greener CD release, were mixed in 1998 or 1999 by Mark Trombino at Big Fish in San Diego. The extra tracks "Is That All?" and "She Watches Columbo" also come from that mix session. "Jarvik 7" was actually a Skiploader demo recorded with Pat Wilson from Weezer on drums and bass that was originally slipped onto the original CD as a hidden track. "Vandalized," "Nibbler" and "Chasing Trash" were the very first Neighborly demoes recorded for Warner Chappell Music Publishing in the Fall of 1996 with Wes Davis (bass) and Val Wolfe (guitar) absolutely crushing it. It's probably for the best that we didn't re-record those tunes, because their rawness is my favorite part of this re-issue. "You and I Against..." was a demo I forgot existed until I found it on an old DAT while trying to curate this reissue. I was tempted to re-record lead vocals because I really love the music, but I'm older now and am somewhat capable of not making an ass of myself from time to time. Finally, the demo version of "Bully's Bliss" had to be added because it too was found on an old DAT and I had absolutely no recollection of its original structure or even which line up is playing it. I may prefer the final LP version as a cohesive song, but I'm amazed at how we went from that demo to the final version.

Finally, it occurs to me that the reason you might be reading this has everything to do with Sunday's Best, which was arguably the most "successful" band I was in despite [or perhaps because of] the fact that I was playing in what seemed like a more diminished/collaborative role. The truth is I was also the primary lyricist in Sunday's Best and co-produced/engineered all the S Best recordings (although Tony Lash performed miracles mixing both records and co-producing The Californian LP). The Sunday's Best song "In Beats Like Trains" and "I Concede The Point" from Grass Is Greener were the last two songs written as Neighborly. S Best needed a 10th song to finish the Poised To Break LP and they helped me rewrite/clean up the chorus. Ed from S Best co-wrote the bridge to "By The Way..." and Ian helped engineer me playing all the instruments on "I Concede The Point" because I guess every rock dude who can play multiple instruments has to record an entire song by himself.

That's about all I can think to say about this project for now. When I listen to these songs today, I get a feeling you might be familiar with: you know when you see an old photo of yourself and you actually look pretty good but then you remember how you saw yourself back then and how you were always plagued with self-doubt? Well I do and when I see old candids from my 20s I want to jump back into those photos and pat that person on the back and say, "take it easy on yourself, kid. You're doing ok..." So when the iTunes shuffle drops a Grass Is Greener track, I smile and think "you were not half bad at the whole songwriting thing, maybe you should have tried to enjoy it more."

Bandcamp Daily  your guide to the world of Bandcamp

Sampa The Great joins the show to discuss her release, "As Above, So Below".